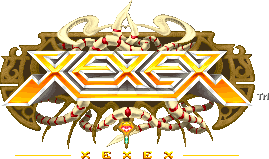 Xexex (ゼクセクス, Zekusekusu?), released in North America as Orius, is a 1991 side-scrolling shoot 'em up arcade game by Konami. It draws on both R-Type and Gradius, adding tentacle mechanics. It was included in the Salamander Portable compilation pack for the PSP released in January 25, 2007.

Once again, space-bound humanity finds itself in trouble. Princess Irene La Tias of Planet E-Square has been kidnapped by the flamboyant and androgynous evil galactic overlord Klaus Pachel Bell, and the last hope in rescuing her and pushing back his army of bio-cybernetic war machines lies in the experimental fighter Flintlock, a spacecraft developed from a recently discovered, mysterious life form, the Flint.

In the ending, the Flintlock sends the orb back through the atmosphere of the planet, where it morphs into a naked fairy for some reason, and saves planet E-Square.

The game is unusual for different gameplay mechanics between the original Japanese and the overseas releases.

Xexex plays almost like R-Type in the sense that you have many enemies attempting to destroy you and you need to properly use the "Flint" in order to survive. The Flint is not like the Force, though, as you cannot connect it to the rear of the Flintlock. Instead, upon releasing it, the Flint will slowly home in on the closest enemy and attempt to connect to it upon it, damaging it. The Flint will also unleash its tentacles, which will block enemy fire.

Note: These weapons are not present in the overseas versions. The name of the current weapon is displayed at the bottom of the screen.

Retrieved from "https://konami.fandom.com/wiki/Xexex?oldid=5581"
Community content is available under CC-BY-SA unless otherwise noted.