Pink in some media

Konami Lady (コナミレディー, Konami Redī?) is an android superheroine created by Dr. Cinnamon (of TwinBee series fame) and a Konami mascot character. She was introduced in the 1988 Famicom crossover game Konami Wai Wai World, as a female counterpart to Konami Man. 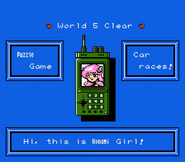 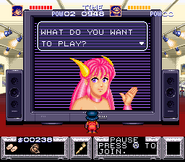 Laura from Castlevania: Rondo of Blood
(1993) 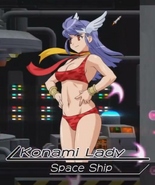 Otomedius Excellent
(2011)
Add a photo to this gallery

This article is a stub. You can help the Konami Wiki by expanding it.

Retrieved from "https://konami.fandom.com/wiki/Konami_Lady?oldid=6814"
Community content is available under CC-BY-SA unless otherwise noted.